Since end of September this year we have had our new website published. We haven’t communicated a lot about this because we had some errors to be corrected. We still have few errors and new inforamtion which will be corrected in short time, but we would be grateful if or when you discover errors to let us know about it. Use the contact form here. 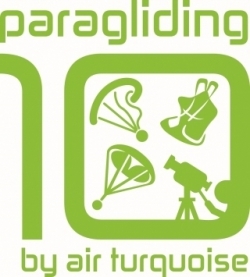 Otherwise we are happy about our new website, the functionalities and simplicity are better for us and hopefully it is same for you.
This year we are celebrating 10 years with EN. We have new logo (see it on the top-left), a promotion logo, new website and new power.
Few highlights:
Stubai Cup (Austria) 2006 we decided to start with EN 926-2 (the standard was published year before).
February 2006 we sent newsletter stating that we will start the new EN and it will replace the AFNOR S52-308/309 (classification known as Standard-Performance-Competition)
March 2006 we had the first EN courses for factory test pilots (Villeneuve and Monaco)
April 2006 we started for full.
First certified glider Amigo 29 with certification number 1 was from manufacturer Aeros (Ukraine)
December 2006 Air Turquoise was certified ISO 9001:2000
2008 in June “Air Turquoise Challenge”, a glide competition during Vertigo Swiss Riviera.
December 2008 we finalized the EN movie which were sent to magazines and manufacturers
2009 in March we attended in Rescue Parachute Comparison organized by FFVL and FSVL. We tested 41 different rescues from 18 different manufactures
2009 in April we got LBA approval meaning we could certify paraglider equipment’s after German law LTF.
2010 Alain and Randi got married, and her gown was made of paraglider fabric.
2011 Tremendous discussion whether competition gliders should be EN certified or not.
2014 Aslann was born. Later that year we started working for ISO 17020.
2015 Air Turquoise SA finally was certified by ISO 17020
2016 10 years certifying paraglider equipment after EN standard
Tweet
back to top